Father Joseph Maskell : A Narcissist, a Sociopath or a Psychopath? 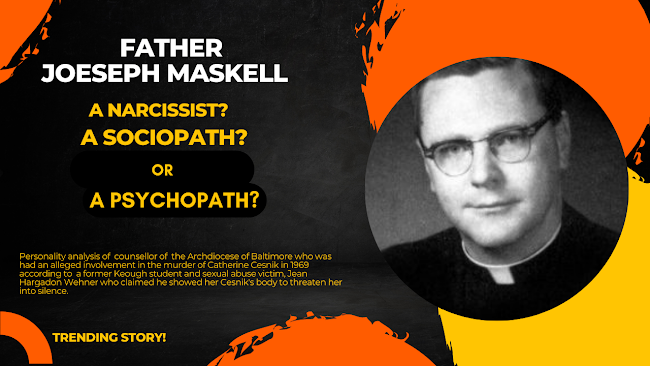 Who was father  Maskell?

Anthony Joseph Maskell was a previous chaplain at Archbishop Keough High School in Baltimore, Maryland who also served as chaplain for the Maryland State Police, the Baltimore County Police Department (BCPD), the Maryland National Guard, and the Air National Guard where he was a lieutenant colonel and several other schools during his career.

He has been accused of sexual abuse against female students at Keough High School and also forced an altar boy at St. Clement Church, Charles Franz, to drink wine and sexually abused him. Approximately 30 people claimed that Maskell sexually abused them.

One of the main victims of sexual abuse Jean Hargadon Wehner allegedly told Catherine Cesnik, a well-liked nun among the kids, about the abuse around the conclusion of the school year in 1969. On November 7, 1969, Cesnik vanished, and her body wasn't found until January 3, 1970. 20-year-old Joyce Malecki also vanished in a similar area four days after she vanished. "You see what happens when you say horrible things about people", Maskell allegedly told Wehner as he led her to Cesnik's decaying remains in a forested area not long after Cesnik vanished.

What are personality disorders and which one did he have?

As we got to know via the famous seven-episode Netflix documentary series "The Keepers" Maskell led such a prestigious life while committing heinous crimes alongside because of complicit people, who ignored the abuse and kept putting Maskell in positions of authority.

Maskell can be called a Monster in layman's language. To be more specific about his personality type, in my opinion, he definitely suffered from some serious personality disorder that enabled him to perform horrendous acts behind closed doors and a charming persona. As he had a very soothing and charismatic guise as reported not just by regular people but also by his victims, he has to be somewhere in the cluster-b spectrum of personality disorders. Personality disorders may result in recurring, chronic, and detrimental thought, emotion, and behavior patterns just like Maskell had.

Nobody is ever formally diagnosed as a sociopath or a psychopath; instead, an antisocial personality disorder is a diagnosis given to people who are sociopathic and psychopathic. So, we will discuss the NPD and ASPD traits here and will analyze the personality of Father Maskel on the basis of information shared in the documentary, to match with them to see where he fits in the spectrum.

This personality condition makes its sufferers feel superior to other people. These signs include:

From the statements of victims in the documentary, we got to know that he had all of these characteristics.

People who suffer from antisocial personality disorder frequently disregard and violate the rights of others. For personal advantage, deceit and manipulation are used. To obtain these benefits for themselves, they could be rude to other people, tell lies, or commit fraud. They can also be more inclined to commit theft. They typically don't feel bad about what they did, though. Those who suffer from antisocial personality disorder are also more likely to develop a drug or alcohol addiction

A pervasive pattern of disdain for other people's rights that has existed at least since puberty is one of the signs of antisocial personality disorder. It manifests as actions like:

From the statements of victims in the documentary, we got to know that he had all of these characteristics, So there is a high possibility that he had ASPD

The term "sociopath" is sometimes used to emphasize the antisocial, rule-breaking aspects of antisocial personality disorder, while the term "psychopath" is sometimes used to convey the internal experience of lack of remorse—pleasure in "getting over on" or inflicting pain upon someone—and other emotional deficits. Also according to Clinical Psychologist Dr. Ramani, Sociopaths are made by socio-environmental factors whereas Psychopaths are born.

Now, under ASPD, let's see how sociopathic people are:

People who are categorized as sociopaths under the ASPD  are characterized by attributes like:-

From the statements of victims in the documentary, we got to know that he had all of these characteristics except for the last two points.  He had a wonderful career and social image. Though he had good professional relationships and confided in his brother who was in law enforcement, this relationship was not on an emotional basis but rather on a very material level. A consistent child abuser cannot have any way of loving someone. So I believe he was not a complete sociopath.
Psychopathic Traits
People who are categorized as psychopaths under the ASPD  are characterized by attributes like:-

From the statements of victims and other information shared in the documentary, we got to know that he had all of these characteristics except the last one because a consistent child abuser cannot have any way of loving someone.

Also, Sociopaths are considered to have a weak conscience, whereas psychopaths can lack conscience altogether. In my opinion, there has to be a complete absence of conscience and empathy to repeatedly hurt innocent kids just for pleasure or to commit cold-blooded murders.

Hence from the above discussion, we may conclude that he probably had ASPD along with narcissistic traits like an outer charm, grandiosity, entitlement, and lack of empathy. He can be said as more of a psychopath than a sociopath because he shows almost all of the traits of psychopathy whereas lacks a lot of traits of sociopathy. So he was a psychopath with narcissism either in the form of NPD or just traits. I believe it was in the form of NPD, as it is said that malignant narcissists have narcissism in the form of personality disorder and some overlapping traits with ASPD.

Note:- This qualitative analytical study on Maskell is purely based on the information shared by the 7-episode Netflix documentary "The Keepers which was released in 2017.

Watch the video on this analysis on my youtube channel. Please subscribe and hit the bell notification to receive the update of new video when I publish it online.

Meadows-Fernandez, R. A. (2018, February 28). What Are Cluster B Personality Disorders? Healthline. Retrieved September 29, 2022, from https://www.healthline.com/health/cluster-b-personality-disorders