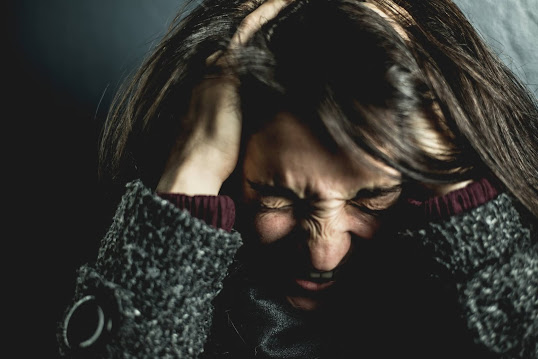 When there is a conflict between what we think is right and what we actually do or face then there is stress inside us which affects not just our mind but also our body. Stress makes us nervous when it is of low intensity however if the intensity is high or the frequency of events causing stress is high then the result is not just the nervousness but takes a more serious form of mental illness called anxiety. When someone suffers from anxiety then they feel anxious irrespective of the situation and are unable to cope with it.

There are several anxiety disorders listed in  Diagnostic Statistic Manual- 5 like Generalised Anxiety Disorder, Specific phobia, social phobia, panic disorder, Agoraphobia, PTSD and C-PTSD, etc. Though The International Classification of Diseases (ICD) identifies complex PTSD as a separate condition, the DSM-5 is yet to list C-PTSD as a disorder separate from PTSD. Some mental health professionals however treat C-PTSD as a different disorder.

The difference between these two is that PTSD or Post Traumatic Stress Disorder is caused due to a single terrifying event however the C-PTSD is caused due to several events in series or a prolonged event.

Post-Traumatic Stress Disorder, PTSD, is an anxiety disorder that can develop after exposure to a terrifying event or ordeal in which grave physical harm occurred or was threatened. Traumatic events that may trigger PTSD include violent personal assaults, natural or human-caused disasters, accidents, or military combat. (Source: https://www.hhs.gov)

CPTSD is caused due to prolonged traumatic events like sex slavery, domestic abuse, childhood abuse or neglect, other types of abuse during childhood due to adversities like poverty or living in a war zone, being a war prisoner, human trafficking, and so on.

Patients with C-PTSD are sometimes misdiagnosed as BPD(Borderline personality disorder) due to overlapping of symptoms in both cases.

According to Pete Walker, author of International Best Seller Complex PTSD: From Surviving To Thriving, Cptsd is a more complex form of PTSD. Its most common five symptoms are emotional flashbacks, toxic shame, self-abandonment, vicious inner critic, and social anxiety. According to Pete, unlike PTSD,  the emotional flashbacks experienced by C-PTSD patients do not have any visual components.

A person with PTSD has visual flashbacks of that single traumatic event that caused the trauma, however in CPTSD, since the trauma is prolonged or reoccurring the brain makes the victim forget the events for survival but at the same time the brain along with the entire nervous system gets habitual of being in survival mode that it forgets to come back to normal response mode.

The defense mechanism of the body involves the release of chemicals and hormones, the brain's specific circuits which further control the other muscles and organs of the body to prepare it for the fight-flight-freeze response. According to Pete Walker, there is a fourth F response known as Faun response which causes the victim to please the abuser due to trauma bonds or Stockholm's syndrome.

A person who has no imprints of trauma on his mind and body will be able to automatically respond to stress by using one of the appropriate Fight, Flight, or freeze trauma responses depending upon the situation. However, a person having an ongoing traumatic life due to abusive conditions, being on survival mode will not be able to properly identify which f-response he needs to adapt as per situation to safely survive and will adopt that which pleases the abuser while minimizing the abuse.

Children of abusive parents and spouses facing domestic violence have been reported to show symptoms of complex trauma. These symptoms persist even after the victim has been rescued from the abusive relationship

Read my blog on "Reason why you cannot heal while staying in an abusive relationship" https://www.theexhaustedsouls.com/2021/05/10-reasons-why-you-cannot-heal-while.html and "Reasons why victims stay in abusive relationships" https://www.theexhaustedsouls.com/2021/01/11-reasons-why-women-are-unable-to.html to understand the relationship dynamics and subtle manipulation that causes the cognitive and behavioral dysfunction and learned helplessness in victims which further pushes them down the hole towards destruction in the hands of complex traumatic stress disorder induced by the abusive behavior of abusers onto their victims.

Emotional flashbacks cause deterioration of mental and consequently the physical health. Toxic shame damages self-esteem and self-love. Inner critic destroys self-confidence and self-worth and the victim loses autonomy and lets the inner critic(i.e., controlling, manipulating, and damaging comments and commands spoken and projected by the abuser to intimidate, ridicule, and coerce the victim are replayed in mind) sabotage happiness, success, and freedom. Social anxiety caused due to the above issues as well as triangulation, manupulation, smear campaign, and other subtly abusive tactics isolates the victim and creates more helplessness.

To ease the pain, victims may adopt harmful coping skills which can further worsen both the abuse as well as mental health of victims.

If you think you or someone you know is suffering from similar symptoms then please reach out for help. Mental health practitioners can help by providing treatments like EMDR, psychotherapy, and medications.

The contents of this blog are for informational purposes only and, are not intended as a substitute for professional medical advice, diagnosis, or treatment. Please seek the advice of a qualified mental health professional with any questions you have regarding a medical health condition.

Also Read:-
Complex-PTSD: The Price You Pay For Staying In An Abusive Relationship.

Trauma bonding: How your brain fools you into thinking that you are in love.

18 Tips For Happy, Anxiety-Free And Peaceful Life Amidst The Covid Crisis.

Complex-PTSD: The Price You Pay For Staying In An Abusive Relationship.