14 Reasons Why Women Fall and Stay in Toxic Relationships. 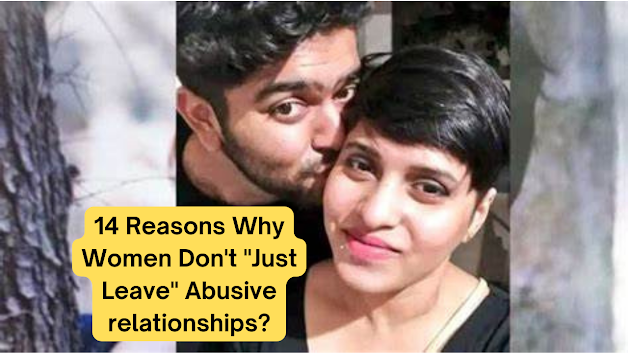 The murder of Shraddha Walker has stunned the nation. Aftab Amin Poonawala, her live-in partner, has admitted that he strangled her to death, sliced her body into 35 pieces, stored the fragments in a refrigerator, and dumped her body parts in Mehrauli forest.
According to police sources, they frequently argued. While he was opposed to marriage, she insisted on it. On May 18, he lost his control during one of these arguments and strangled her to death.
When we watch crime dramas and documentaries or read about tales in the news, we often wonder how foolish individuals could be who fall for these types of men. How is this possible?
The truth is that it's really simple to fall for these kinds of men in our society. Since the beginning of time, dangerous males have been harming women while disguising themselves in society.
Girls with insecure attachments with their parents in infanthood typically develop into adults who have trouble comprehending both their own and other people's emotions, which hinders their capacity to establish or keep up enduring connections. They could have trouble making connections with others, avoid getting close, or be overly clinging, scared, or worried in a relationship.
Such girls lack the foundation of who they are at their core when there is an incomplete sense of self. In an effort to "discover" themselves, they could abruptly move from one relationship to the next, or they might have a history of unstable friendships, hobbies, or interests that are driven by whims or other unhealthy connections. They run the risk of replicating their attachment scars in their adult relationships if they don't know who they are. While these wounds frequently recur on an unconscious level, the likelihood that their sense of self will be harmed increases the more times they do so without being repaired.
We all have come across women such as women at some point who seem to be in abusive relationships and wondered how they fell into it and why isn't she leaving it?

According to my research on this issue, a woman who is being abused and is not leaving might be going through something that is beyond the comprehension of someone who hasn't been in such an abusive relationship. There would have been instances of extreme abuse in her life with him but she could never be courageous enough to leave him. The possible reasons could be:-

You could be involved with a toxic partner if he shows the following signs:-, becoming overly emotional about why you didn't tell him where you were going, making you feel bad after a fight, or pleading with you to stay with them after you catch them crossing a line—remember the traits and try to identify any patterns.

Please fill out this survey form https://forms.gle/bvKFE4XpaHUy7HFu7 and help me write a self-help book for restoring spiritual/religious faith in Battered Women.

Also read:-
What love is, what it's not!
Trauma bonding : How your brain fools you into thinking that you are in love.
9 tips for surviving this valentine's without love from outside.
How to know if someone has a crush on you!
20 Things Narcissists say when they are gaslighting you.
This is why having a baby won't save a failing marriage.
14 Reasons why narcissts hide in religious communities.
Top 32 Reasons why people don’t text back!
Smear Campaign: This is why people love your abuser while they hate you!
Panic Attack: Simplified for the layman.
How to introduce spirituality at an early age for a better metal health?
How to save your child from disguised monsters?
This could be the reason why you are an exhausted soul.
Difference between Fear and Anxiety.
Do this to control your anger towards your kids.
What’s wrong with abusive men?
17 ways to identify a controlling manipulative friend?
14 signs you have a controlling spouse or partner.
14 Reasons why women are unable to leave abusive relationships?
No, You are not crazy! You are Being Gaslighted.
8 Things narcissists do to control your social life
10 Signs of a Lousy Spouse.
The existence of unsafe toxic parents is a reality!
Letter to " a mom with depression”.
How to be a perfect woman?
7 types of toxic parenting styles that create miserable and hopeless adults!
5 Rules for healthy sibling relationships.
13 Signs you are in an abusive relationship.
Psychological Well Being and Stigma Attached to It.
17 Subtle signs a woman is romantically interested in your partner.
How to have boundaries with toxic parents?
This will happen if you idealize your abusive parents.
Posted by Annu Pandey at January 02, 2021